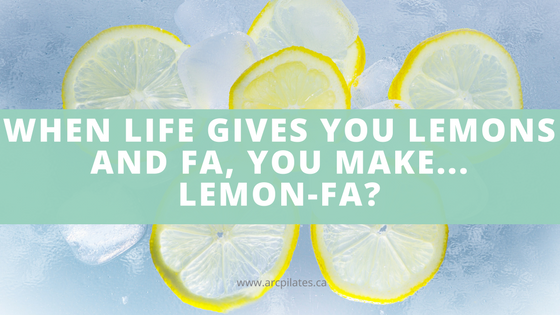 When Life Gives You Lemons and FA, you make Lemon-FA

My oldest son was diagnosed with a very rare debilitating degenerative neuromuscular disease called Friedreich’s Ataxia (FA) http://www.curefa.org in 2011.  This has resulted in a loss of balance and coordination; his brain does not tell his limbs where they are in space.  Another complication of this disease is scoliosis.  He required a spinal fusion to correct his curve and he was fused from T3-L3.  Today he has very limited weight bearing ability and uses a wheelchair full time.

Back in 2015, I was working as an administrator in a spine clinic.  I am the mother of 4 kids and I was feeling completely worn out.  I had begun a serious Pilates practice about a year earlier and I instantly loved everything about Pilates.  I began to think maybe one day I could do Pilates for a living.  I thought how valuable Pilates could be for the population of patients that I was seeing at the spine clinic.  I also thought, “I think this could really help my son and others dealing with neuromuscular disease”.  I knew I wanted to make a difference.

So fast forward: I quit my job, enrolled in Pilates training, completed my training and was PMA certified in 2017.  While doing my training we had to do a research project. I chose to work with my son and my topic was Pilates and FA. Working with my son was challenging but also incredibly rewarding.

I had to look at movement, the human body and my teaching in a new and unexpected way.  Friedreich’s Ataxia challenges me every single day in ways that I could not have imagined. It has expanded my view of a human body, taught me patience with compassion and has given me permission to be creative as a Pilates teacher and as a human being.

In the beginning, I would spend time talking about his breath, the importance of just thinking and appreciating it.  The awareness and focus of breath can truly change a movement practice.  I recognized that I was teaching his body a completely new language of movement and this required a great deal of persistence.  I wanted to encourage spinal movement in all directions in each session. I wanted to focus on what he could do and how to create small successes every session.

One of my early struggles was how to plan a session with a balance of exercises that his body could tolerate without overloading his nervous system.  This one was big – as fatigue is a huge factor with FA. Navigating this point was crucial.

In our early sessions on breath, he had never really thought about breathing into his bottom and side lungs.  When he was able to focus on breath with practice and tactile feedback, he was able to move his breath deeper than ever before.  He thought that was pretty awesome, as did I.  I cannot describe the feeling I had as a Mom seeing the improvement in breath.

The next few sessions were probably the most humbling as a Pilates teacher and as a Mom.  I realized that I see him every day and how he struggles with movement. Now to see him from a movement practitioner’s perspective, I became really aware how difficult it is for his body to do what he wants it to do.  He has to use so much energy and concentration to achieve even the simplest of movements.

Then I began to see that change was on its way, I could see that he was beginning to feel some positive effects on his body and he was excited about the change.   My goal became how to help him to discover success with each movement, no matter how small the movement was or what it really looked like.  I believe as long as the client is safe, all movement is good movement.

At this point, I really had to look within the Method to see what exercises I could incorporate to assist with flexibility, strength and endurance for his body.  The biggest breakthrough, in these middle sessions, was to visibly see the increase in circulation to his lower extremities.  He said, “this is the first time in years that I can actually feel the sensation of blood pumping to my lower limbs”.  At the beginning of each session, his legs were blue and cold but by the end, they were warm and pink.  I saw before my own eyes what Joseph Pilates had described in Return to Life. This is where I get so passionate about Pilates and the difference it can make is anyone’s life.

In the last few sessions, this is where the magic began to reveal itself.  The changes had become dramatic and consistent.  There was evidence of new body patterns being created with increased strength, flexibility and endurance.

We were able to decrease neuropathic pain in his lower extremities and he was now able to tolerate leg springs on his bare feet (18 sessions in).  With the increased tolerance he was able to go deeper and create some much-needed length in his hamstrings and Achilles tendons.  He was able to not only produce lengthening in these muscles but he was able to maintain it on his own.

I have carried these skills with me on my teaching journey.  I understand that even though progress may seem slow, each session of movement is creating a new pattern.  Movement is the most important factor to transformation.  I believe that within the Method of Pilates we begin to tap into infinite possibilities and that movement options are endless.  It is OK to think outside the box for your clients.  https://www.arcpilates.ca

I know that Pilates will not change the outcome of his disease, however, I do know that small change is still change.  I believe that Pilates has something to offer everyone.  I believe that perhaps the most valuable lesson I have learned can be found in Joseph Pilates’ own words, “PATIENCE and PERSISTENCE are vital qualities in the ultimate successful accomplishment of any worthwhile endeavor.  Practice your exercises diligently with the fixed and unalterable determination that you will permit nothing else to sway you from keeping the faith with yourself”.

You have Successfully Subscribed!